This is the famous city that was destroyed by the Mount Vesuvius volcano in 79 AD. It was originally an Etruscan city and then a Roman one. It is located in Campania south of Naples and north of Sorrento, Italy. It was buried in 13 to 16 feet of hot ash from the volcano. Years went by and people forgot about the city and the people who lived below the surface. It became a Roman colony in 80 BC. 1500 years passed until the city below was discovered.

Today it is an outdoor museum where you can see homes, stadiums, restaurants, houses of prostitution and bars. This is a stop well worth your time. As you walk around the streets of Pompeii, imagine the original occupants who lived here. Then imagine that fateful day when Vesuvius blew its top.

Come walk with us through this impressive ancient city that has been perfectly preserved in time. Click on the YouTube VLOG video below …

Pompeii in central Campania, was founded in the 6th to 7th century BC by a group known as the Oscans. The Etruscans lived there and it was a main Roman city until that fateful day in  79 AD when Mount Vesuvius blew its top. The mountain provided a fertile soil that allowed people to this day grow wonderful crops.

The early mountain was much larger than what we see today. The entire center vaporized and was blown out leaving what looks like two smaller mountains. Vesuvius is impressive from wherever you see it. It dominates the Naples landscape. You can clearly see it from parts of Sorrento and Capri.

We pass right by it on the A3 Autostrada as we pass by on the way south to our condo. We always feel humbled by its presence. Nature is  awesome. Today you can climb Mount Vesuvius and walk up to the rim.

Beaches as far away as Positano have lava rock on them. The soil in the entire central Campania is fertile because of this mountain. It was a fantastic destructive power but it also gave back tasty crops and a soil that made farming easy.

As we walk Pompeii we feel the ancient civilizations pulling on us. Imagine you are on streets that they walked in their daily lives. You can enter businesses where they ate or bought bread. You can enter hotels and bars and even homes that showed the beauty of life before 79 AD.

These people had a great civilization. They were sophisticated and life was fun. It was a rich city in culture and money. They didn’t even have a word for volcano. It must have been horrible on that day when the huge mountain nearby suddenly exploded. People were caught and killed in their daily routines. The nearby harbor was filled in. Suddenly so many were dead and the landscape changed forever. This is very revered grounds. 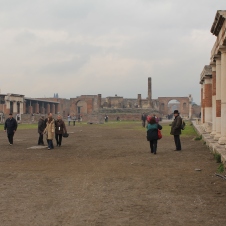 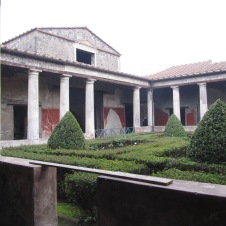 If you find yourself in Rome, Naples or the Amalfi Coast take a side trip to Pompeii. You will be glad you saw this wonderful city fully preserved by the ash that covered it. When modern man found it there was only a field of hardened ash. As they dug they began to find the remains of Pompeii. Soon whole buildings were uncovered. Except for missing roofs, which were probably wooden, everything was preserved as it was on that day in 79 AD. A large part of the city was soon uncovered.  Today they are still uncovering Pompeii. This is history and this is Italy!

More and more travelers are headed to Italy. It is romantic, it has great food, the scenery is beautiful and the wine is world-class. These are the top destinations people are headed to:

All of these and so many more should be on your bucket list. Tomorrow we will look at top places to visit in Italy’s south. Most tourists never make it here!

Pompeii is an ancient Roman city that was destroyed by the volcano Vesuvius in 79 AD. It is estimated to be from the 600 BC. There were about 11,000 people in the city when it was destroyed. This was a big city with bars, houses, bread stores, restaurants and houses of prostitution. The homes were spacious, even by our standards. They had gardens and were beautiful. The streets had speed controls to slow down horse and buggy. The streets could be cleaned by opening a water pipe at the top of the hill and letting the water run down taking the trash with it.

Pompeii is just south of Naples and west of Mt. Vesuvius. It is easy to get to by car on the Autostrada (A1 then A3). There are tour buses from Naples and Rome. You can also take a train to Naples then a bus. 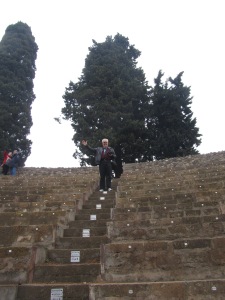 Courtyard of a private home

Inside a private home 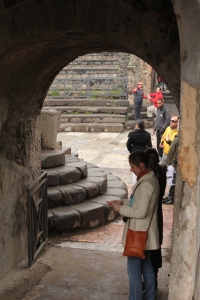 Entrance to a coliseum 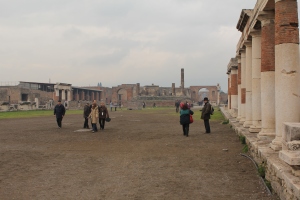 Huge courtyard in the city center 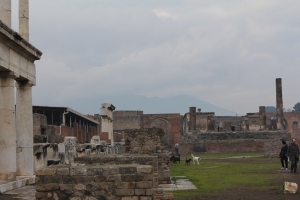 The sleeping Vesuvius behind a cloud

Pompeii is rich in history and well-preserved because of how it was destroyed.

Posted on September 1, 2015 by georgefebish

Before the Romans there were the Etruscans. They were an advanced people. They built some great cities like Pompeii. This civilization lived in ancient Italy in the current areas of Tuscany, Umbria and Lazio. It started just after the Iron age and last up to the Roman period.

“Livescience” has an article on early Etruscan life. It was titled “Skeleton of early Prince Reveals Etruscan Life”. The Etruscans they are talking about lived between 616 & 579 BC. That’s a long time ago. If you have been to Pompeii or are planning a trip to Naples or Rome Italy, go and see Pompeii. It’s that famous city that was destroyed by the volcano Mount Vesuvius in 79 AD. It was not destroyed by lava but very hot volcanic ash that covered the entire city killing everyone inside. After they found this remarkable city they dug out the ash and discovered a modern city. Some of the things that were amazing to us were:

Don’t miss this wonderful glimpse into the past.